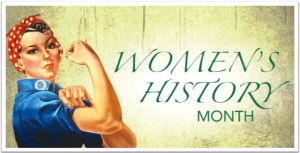 Presidential and Congressional Support
The first steps toward success came in February 1980 when President Carter issued the first Presidential Proclamation declaring the Week of March 8th 1980 as National Women’s History Week. In the same year, Representative Barbara Mikulski, who at the time was in the House of Representatives, and Senator Orrin Hatch co-sponsored a Congressional Resolution for National Women’s History Week 1981. This co-sponsorship demonstrated the wide-ranging political support for recognizing, honoring, and celebrating the achievements of American women.

A National Lobbying Effort
As word spread rapidly across the nation, state departments of education encouraged celebrations of National Women’s History Week as an effective means to achieving equity goals within classrooms. Maryland, Pennsylvania, New York, Oregon, Alaska, and other states developed and distributed curriculum materials for all of their public schools. Organizations sponsored essay contests and other special programs in their local areas. Within a few years, thousands of schools and communities were celebrating National Women’s History Week, supported and encouraged by resolutions from governors, city councils, school boards, and the U.S. Congress.